So, why did I skip the country and teach overseas?

I needed air!  I needed a change.  I had been in the same area for 17 years and felt suffocated, although I enjoyed my job and felt wanted and appreciated at the same time.

My first overseas posts were in the Middle East.  I went to the United Arab Emirates and I was plunged into a school of 2,000 + pupils from being a kingpin in a school of 250, and I loved it!  The kids in my class ranged from 9-13 years old.  They were supposed to be 9-10 year olds, but what the heck!  That first year felt like being on holiday all of the time.  I loved Monday mornings.

Why?  Because it was the middle of the week and the weekend began on Thursday!  Okay, so we worked Saturday and Sunday, but that was simply novel and not arduous.  The facilities in the school were excellent and were there to use – an Olympic size swimming pool, with only me in it and a vast sports hall for any activity you cared to indulge in! 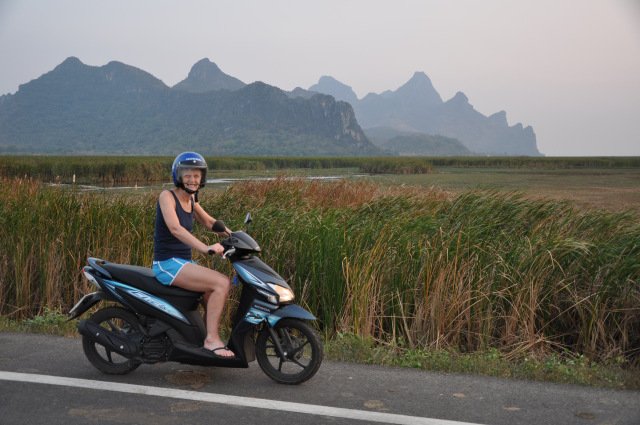 Elaine Crawford on a Honda

What do I remember most?  I think of the calls to prayer echoing out over the city, the scenery and the food.  I love Indian food and there is stacks of it.  I love Arabic food and there it is to indulge in.  If you want it, of course you can get European food – just head off to Spinney’s supermarket and you can cook your own!

My second post was in Kuwait.  That was straight after the Gulf War of the 1990s and that was a shock.  The destruction and devastation were unbelievable.  The oil wells were still burning until the Russians found out how to blow out the flames.  The school was a delight and the children were just gorgeous.  I think that was the best year of my life.

I went to Hong Kong after that.  Did I like it?  Well, I stayed for 17 years and I wept when I left.  Yes, I really did enjoy it so much.  It was hard work, long hours, plenty of paper work, parent evenings and reports.  Just like everywhere really!

So what matters?  What makes a difference?  Well, the answer is you.  It is your attitude that counts, your application, your acceptance of responsibilities.  Work hard and you can also play hard.  Take the opportunities as they come.  It is a new home, so don’t expect the same – just enjoy the differences!

Elaine Crawford trained at Bingley Yorkshire, ages ago, and lived in the Yorkshire Dales until she got itchy feet.  She always loved the outdoors and sports and went as an assistant leader with the Anglo Austrian Society to Austria whilst at college.  This prompted her to take school parties walking the highways and byways and the Three Peaks in Yorkshire.  She took groups on Youth Hostelling trips in Britain, Belgium, Holland, Germany and France.  Later she branched out and went cycling and camping with parties in Britain, The United Arab Emirates and China.  She is currently dividing her time between the UK and Thailand.

Written by Elaine Crawford
who has spent much of her career working overseas, first in the Middle East and then for many years teaching in Hong Kong. She has also taught in Tanzania and, most recently, Azerbaijan.
Explore. Connect. Share.
We're the world's leading community of international teachers. More than just a job search, Teacher Horizons is your online home, wherever your journey takes you.